Jim Simons recently participated in three interviews hosted by MIT, covering mathematics, finance, and philanthropy. These are rare and lengthy conversations with one of the industry’s most interesting and private people. As much as I enjoyed the talks, the finance portion reaffirmed my belief that Renaissance’s Medallion fund probably doesn’t owe its success to magic. No methods or technologies they employ would individually shock or awe, and I’d wager there’s no silver bullet or big secret to what they do. Believing this doesn’t diminish what Medallion has achieved, I don’t think, at all.

Magic or no magic, Medallion is fascinating, isn’t it? After beginning life somewhat unremarkably as an accidental trend-following strategy (an interesting side-story), things changed. Performance after 1990 is simply without comparison: 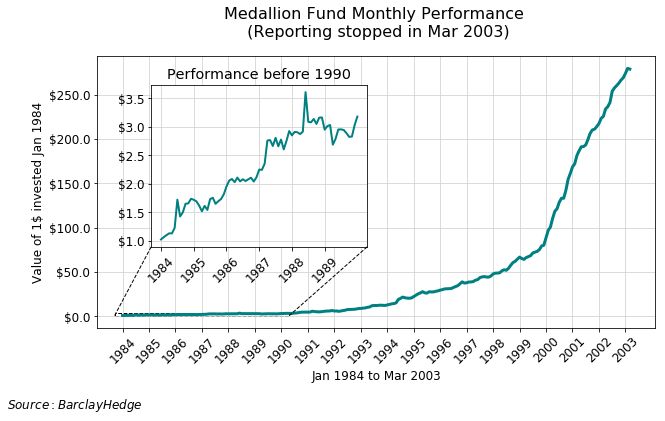 Even with this early data, very little is confidently known about the firm’s modern strategy and methods, but that certainly doesn’t dim the aura. We still speculate, discuss and wonder. Medallion seems to represent something important and shared within the investment community. The fund is a tangible manifestation of alpha—a placeholder for what we don’t know and can’t explain.

Despite intense secrecy, there is some reliable information available about Medallion. For one, we know they were early. Medallion began trading in 1984, and despite several transitions in style and approach, it’s amazing to learn some of the things they were talking about over 30 years ago: hidden markov models, advanced optimization algorithms, and principal components. These techniques are still quite modern, likely in use within some machine learning strategies today.

By any measure, this is a huge operation, especially considering they only manage two funds. We know the timeframes where Medallion operates (at least partially) are short. Here, the competitive forces are absolute and unforgiving; signal decays quickly and edges don’t persist for long. Theoretically, you’d want to be small to minimize the friction incurred when interacting with markets. Nimble should be better. But Medallion isn’t. Instead, they are the driving the equivalent of a semi-truck in a formula-one race, and winning. How’s that possible?

Well, size can afford two things: people and breadth. It’s a safe assumption that Renaissance has an incredibly talented workforce. Experienced engineers and pedigreed scientists from technical disciplines have been convinced to work at Renaissance and seem to stay. Turnover at the firm has been remarkably low, likely due to a blend of environment, the ability to invest retirement assets in Medallion, and uniquely stringent non-compete agreements.

Breadth refers to the diversity of instruments and ideas within a portfolio. More of it is a good thing, since it implies more diversification, however it’s not necessarily easy to achieve. Truly differentiated ideas, in a mathematical sense, are difficult to find and become more difficult to find after you’ve already found a lot of them. Plus, knowing, with any reasonable degree of confidence, that something found is novel (and not recycled or the result of luck) is a non-trivial exercise.

Both talented people and strategy breadth are expensive. Compensation needs to be high enough to convince sought-after individuals to stay, work hard and deliver ideas, while the operational capability to run research and trading across multiple asset classes with execution sensitive timeframes is complicated to say the least. You’ve got to be big, plus spend a lot of money, to do this well. With such high fees still charged on proprietary assets, the costs of maintaining this endeavor must be enormous, but clearly are worth it.

It’s no surprise that Medallion seems to balance these competing forces perfectly, maximizing their potential subject to the limits imposed by liquidity.

What does all this tell us?

Everything about Medallion today is indicative of a firm seeking to generate as many ideas as they can, while managing the operations of such an endeavor as efficiently as possible. They’re essentially the world’s biggest strategy factory paired with incredible quality control. Renaissance likely generates more ideas faster than anyone, and from such a large signal pool, probably picks the best (or filters out the worst) with more success than anyone, too. When you pair this with a huge head start, you don’t need magic to explain Medallion.

It’s the familiar, maybe boring concept of diversification at work here. I can say that with confidence, since it is, in a sense, the easiest way to generate the amazingly high Sharpe ratios seen from Medallion. I’m sure Renaissance would rather achieve the same performance more cheaply with less people, but the reality is that the individual predictions, to a large degree, are commodities. They are widgets. Alpha comes not from magic prescience, but from managing the life-cycle of large quantities of differentiated ideas, all while getting the quality control (i.e. statistics) right.

Think if they had actually discovered magic—some singular idea, framework or technology that takes in the same data (prices, fundamentals, alternative data), but returns something vastly more predictive. If this were the case, wouldn’t Renaissance’s staff be smaller? Additionally, wouldn’t they be leaving amazing amounts of value on the table by only monetizing via a hedge fund? Bio-tech, physics and other hard sciences would, arguably, be much more profitable, direct applications. At the very least, they’d be complementary.

Finally, what would this technology look like? Given the amount of competition and attention dedicated to forecasting markets, this would likely need to be some fundamental change to how we predict in a general sense. At the core would be an idea that would probably rewrite statistics, physics and philosophy. It’s not impossible, it’s just not likely, given what we see at Medallion today.

What about everyone else?

There’s a term, “scaled-quant,” used around the industry to describe the operational model behind Medallion. It appropriately describes Medallion, but also the businesses behind Bridgewater, Two Sigma, Winton, DE Shaw, Citadel, and others. Loosely, this phrase seeks to characterize the economies of scale available to large, diversified, often quantitative, trading operations. Stripping away industry-specific context, it’s describing the same effect that makes Amazon dominant, but instead of being focused on scaling effects associated with selling and delivering physical products, scaled-quants capitalize on the predictive power gained by large increases in the production of ideas. Bigger leads to better net forecasting, and at a point, seems to justify, sometimes strongly, the increased cost of the supporting infrastructure.

The implications for smaller quantitative funds, unable to access these massive scale effects, is clear: be different. It’s unlikely you’ll be able to compete in the idea generation game, and maybe there are no silver bullets easily findable, but there will certainly be appetite for differentiated processes. Look for new data, techniques or philosophies that lead to new outcomes. Aim to be in a position of advocacy. Teach potential investors something they don’t know. Take more design risk and find inspiration in new places. If you’re hoping the current, difficult regime will end and the markets will come your way, that’s a valid opinion. But just remember who’s across the table and what their actions imply. Markets are ever changing, and if your competition is too, think carefully about ways to get ahead.

The risk of loss in trading commodity interests can be substantial. You should therefore carefully consider whether such investing is suitable for you in light of your financial condition. Past performance is not necessarily indicative of future results.